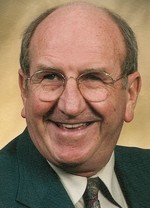 Mr. Hardin graduated from Cynthiana High School in 1953. He obtained a Bachelor’s Degree in Biology & Chemistry from Georgetown College & a Master’s Degree from Oklahoma University in Radiological Health & Sanitary Science.

Mr. Hardin’s last employment was as Executive Director of the Conference of Radiation Control Program Directors, where he served for over 19 year, prior to his retirement. CRCPD is a national professional organization representing state and local government agencies throughout the United States that have responsibility for the regulation and control of radiation resources. Prior to his employment with the CRCPD, Mr. Hardin was a Research Analyst with the Kentucky Legislative Research Commission, and prior to that he was director of the Kentucky Radiation Control Program, the state agency responsible for the regulatory control of radiation withing Kentucky.

Mr. Hardin received several awarded during his professional career, including the Gerald S. Parker Award of Merit, which is the highest award offered by CRCPD. He won the Hartman Lecture Award, bestowed on the keynote lecturer at the Radiological Centennial of the discovery of X-Rays. He also received the federal Food and Drug’s Special Citation for outstanding work in the field of radiation protection.

Funeral services will be held 11 a.m. Friday, October 9 at Faith Baptist Church, 50 Bridgeport-Benson Rd. in Frankfort with visitation from 9 – 11 a.m. A graveside service will be held at 3 p.m. in Cynthiana, KY at Battle Grove Cemetery located at 531 Pike St.

In lieu of flowers, Mr. Hardin requests donations be made in his memory to Faith Baptist Church or Georgetown College, 400 E College St., Georgetown, KY.