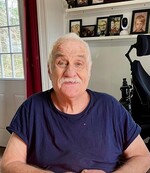 Donald Spicer, 73 of Cynthiana, KY passed away Tuesday, February 22nd, 2022. He was preceded in death by his parents Arnold and Rose Spicer, his brother James Spicer and his two beautiful children Emanuel Spicer and Nicole Spicer Wagner.
Donald survived by his son Donnie Spicer Jr., two brothers Ronnie (Debbie) Spicer and Gran (Tammy) Spicer, four wonderful grandchildren, Sierra (JT) Custard, Justin Spicer, Monica Spicer, and Annie Spicer. Donald thought there was no better treasure then his children and grandchildren.
Some of his hobbies included raising horse and pigs on his farm and spending quality time with his youngest granddaughter Annie.
Before Donald passed away, he said “there will be peace in the valley” which was a reference to a song “There will be peace in the valley for me someday, there will be peace in the valley for me, oh Lord. I pray there will be no sorrow, no trouble, I see there will be peace in the valley for me” Donald was a wonderful person, and he will be greatly missed.
A funeral service will be held on Thursday, March 3, 2022, at 11:00 AM at Ware Funeral Home, with visitation being held from 10:00 AM to 11:00 AM. Brother Merrill Mitchell will be officiating. A private burial will be held at a later time at Pythian Grove Cemetery. View and sign the guest book www.warefuneralhome.com.