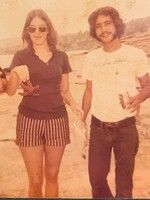 “Mary Blanton” Thornberry Contella, an avid reader, activist, and bumper sticker collector passed away on Saturday, May 22, 2021. She was 69. Mary took her last breath at Grand Haven in Cynthiana, KY after a long struggle with vascular dementia.
Mary was born in Louisville, KY to the late Dr. Chester Louis Thornberry and the late Edith Osborne Thornberry. From an early age it was clear that Mary was ready to take on the world outside the small, quaint town of Cynthiana that she had grown up in. With her quest for adventure, Mary made sure to live her best life. Growing up, she always made sure to enjoy life to the fullest. It’s even been said that she hitch hiked all the way to Woodstock! After graduating high school, Mary enlisted in the United States Navy. While being stationed in San Diego, California, she met many great friends who quickly became her family. It was there that she went on to fall in love with a young Italian electronics tech, named Charles Anthony Contella. They would later marry and have their first born, Anna Elizabeth Contella.
While living in California, Charles fell ill which became the determining factor for Mary’s relocation back to Kentucky. In KY, they born a second daughter in which they named Amy Charlotte Contella.
Mary was a dedicated mom and hard worker. She was employed with the Veterans Administration for many years. As her two girls grew, it became apparent they needed her around more, so she switched her career path to take a night job with United States Postal Service. This switch afforded her the ability to be home more and to volunteer at her children’s school as the “Gray Lady”. Anyone that knew Mary knew she also had never met a stranger. She loved to socialize and always called everyone “youngin”. She saw the best in everyone and considered every person she met a friend.
After thirty years of total government service, Mary retired. She went on to take many trips to the beach to visit her eldest daughter and to relax with her best friend, Judy Bennett Phillips. The beach always brought peace to her. It was her happy place.
Before entering the nursing home, Mary was very active in her community. She served as an officer in the United States Postal Union, and was also a member of the Harrison County Democratic Women’s Club, and the Cynthiana Christian Church. When she wasn’t volunteering with these organizations, Mary was trying to get everyone she knew to become a registered voter. Democrat of course!
Mary is survived by her long-haired hippy husband, Charles Contella. As with most families, sibling drama ensued as she grew older and sadly, she became estranged from her eldest brother, Thomas (Ann) Thornberry and also from her sister, Jane D. Thornberry. She did however always adore her youngest brothers, “Joe Billy” Thornberry, and “Jim Brack” Thornberry, along with her bonus mom, whom she also considered her best friend, Laura Jane (Bill) Maultby. Mary leaves behind two daughters, Anna (Kevin) Tipton, and Amy (Rob Geist) Willoughby. Perhaps her most favorite role in life was being a nana. She is survived by her loving grandchildren, Ibiza Pearson, Xain Tipton, Ryker Tipton, Isaac Willoughby, and Sophia Willoughby.
There will be a service for Mary at a later date. In lieu of flowers please consider donating a book to your local library; making a donation to the Relay for Life; or the Harrison County Democratic Women’s Club. View and sign the guest book www.warefuneralhome.com.