To share your memory on the wall of Morgan Conley, sign in using one of the following options:

Receive notifications about information and event scheduling for Morgan

We encourage you to share your most beloved memories of Morgan here, so that the family and other loved ones can always see it. You can upload cherished photographs, or share your favorite stories, and can even comment on those shared by others.

Thank you Lisa for everything! I know you loved her like one of your own! And yes her little ones carry her smile as well! Love you!
SS

Posted Jan 09, 2020 at 08:32pm
Morgan was so special. More than special. I still remember meeting her the first time, she took my hand and walked with me. She was a ray of light.

Scott and Sarah purchased flowers for the family of Morgan Conley.

Posted Jan 09, 2020 at 06:27pm
Holding you all in our hearts. May sweet memories of Morgan get all through this difficult, sad time and always bring a smile to our hearts. WeLoveYou

Cass, Parry, Courtney and PJ Boogard purchased flowers and planted a memorial tree for the family of Morgan Conley.

Posted Jan 09, 2020 at 06:08pm
Morgans bright light will be so missed. Wishing all comfort in loving and happy memories to hold on to forever. With unending love

Flowers were purchased and a memorial tree planted for the family of Morgan Conley.

Posted Jan 09, 2020 at 01:04pm
Hard to believe that she is gone so young. She was such a beautiful young woman. My heart breaks for William, Jolene, Caleb, and her beautiful children. May God wrap his comforting arms around them and help them through this terrible time.
Cousin,
Joyce Rickens
Comment Share
Share via:

Thank you for your condolences! She was beautiful and will be dearly missed. 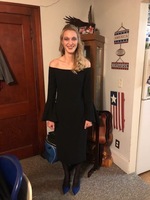