To share your memory on the wall of Roger Thompson, sign in using one of the following options:

Receive notifications about information and event scheduling for Roger

There are no events scheduled. You can still show your support by sending flowers directly to the family, or planting a memorial tree in memory of Roger Dale Thompson.
Plant a Tree

We encourage you to share your most beloved memories of Roger here, so that the family and other loved ones can always see it. You can upload cherished photographs, or share your favorite stories, and can even comment on those shared by others.

Posted Nov 05, 2020 at 08:59am
I knew Roger Thompson in 1970..... to me he was a special person. One day, Me and George Allen Wilds, and Roger Thompson, when to Louisville, Kentucky, in my car, to do some drinking and having some fun. After midnight we headed back to Paris, Kentucky. I was so drunk I could not see straight, I ran the car off the road into the grass........, and a police car pulled in behind us. We all three got out of the car and talked to the Policeman. I couldn't stand up, Roger and Allen were holding me up......Roger told the Policeman that He would drive the car home, and there would be no more problems. The Policeman said OK and left. Roger dove us on home to Allen's home in Paris, I passed out all the way home. I think Roger saved my life...If I had continued to drive I would have maybe killed everyone......... Yes Roger was good to me........ When I got out of the Marine Corps in 1973, I lived with Roger Thompson and his wife Marietta, for a short time.......He treated me like a brother.... I felt like family and I have nothing but good memories of Roger...... I knew Roger's dad and mother and sisters, I loved them all. May Roger Thompson Rest in Peace....I wish Roger the BEST.......Forever.......... ..Raymond Wells
Comment Share
Share via: 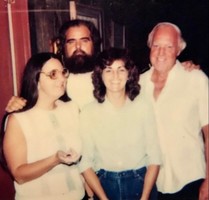